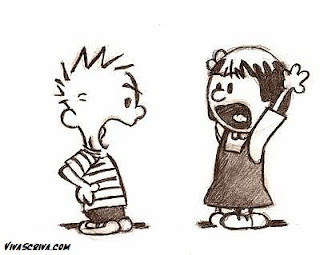 When standing in line at Wendy's, people usually order food, sit down, eat, listen to a little Elton John coming from the circle speaker in the ceiling, and then leave. But for my family, this time was different. Not really for our particular Wendy's routine, but for the crazy lady and her young son standing behind me - and for a cranky man.

There I was. Ordering the usual for my family. And this woman in line - frantic, spastic, fidgety - was on the phone, loudly saying things like, "I make scrambled eggs every morning. I do what I can. No one cares."

And I opened my eyes real big for the cashier. Like a, "Get a load of the crazy lady behind me" kind of look. I then proceeded to use my non-indoor-voice to get one of my kids to help with the trays. (Now which lady struggles with keeping it classy?)

As we sat down to eat, I forgot all about crazy lady. But then she reminded me (and the whole building) of her presence by standing up and yelling, "Sir, I told you I was sorry! What more can I do?" She was directing her angst at a cranky man sitting about 10 feet from her. Apparently he told her to get off the phone.

Crazy lady and cranky man, a perfect combo for drama. We were glued. But as things gradually heated between the two - with the use of expletives - my youngest said, "Mommy, I think I want to leave now." (Not my child using bad language, mind you. Cranky man.)

But before we could make a quick exit (this is the part of the story where my brother-in-law said, "Oh I've heard this one before," as if I were telling a joke), crazy lady threw her chili at cranky man.

The place was silent. Were we next?

As cranky man threatened to call the cops, she grabbed her stuff to leave. And before she walked out the door with her shy little boy in tow, she turned around and screamed to everyone present, "I said I was sorry! What else was I supposed to do?!" (Well for starters, get off the phone and not throw your chili. But that's me.)

Looking over at crazy lady's table, I saw that she left behind a book. It was a hard-back, too. And a library book at that. So having experience myself with losing expensive library books, I thought, "Should I grab it and go find her in the parking lot?"

So that's what I did. People soon caught on and said things like, "Uh, we're not on her side..." as if we're a team or something. Wendy's customers vs. crazy lady? Which I thought especially ridiculous when I looked over at cranky man, more like "pompous man" for just sitting there - covered in chili - still eating his lunch with a smug grin. (And I just know this is how it went with his wife later on, "It's about time someone threw their chili at you!")

I found her sobbing in her car and gave her the book. She said to me, "I can't believe I threw my chili at that poor man." And I had such compassion all of a sudden. Pretty sure she thought I was going to tell her off. But how could I when I also have it in me to totally freak out?

I wanted so badly to go there with her, and get all Jesussy - but she was still on the stupid phone. Instead I quickly asked if she's okay and told her I understood what it's like to get worked-up and for her to take it easy - maybe not drive off right away - stuff like that.

But I think God wanted me to use a less-means-more approach in caring for this woman and just show her that the love of Christ can still invade her messy situation. After all, nothing can remove her or me from the reaches of God's love (Romans 8:35-39). And by throwing a little grace back at her, not chili, I'd like to think God was paving the way to do even greater things in her heart at a later time.