With the Voice He Gave

True confessions:  I am... insecure. There, I said it. Or maybe not insecurity so much, but rather jealousy? Or a lack of gratitude? I just happen to like, for example, that guy's public speaking skills or her knowledge of United States history - or, my newest one, their ability to use power tools.

By "their" I mean, the Junk Gypsies sisters, Amie and Jolie. Probably haven't heard of them - fairly new to HGTV channel. They're just a couple of whimsical designer/decorator chicks who can hang an old, rusty clipper-ship-turned-chandelier in two seconds - while wearing this adorable jacket and "Yo" hat: 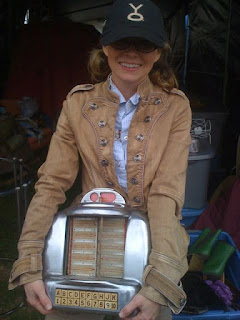 So let me dissect a little of what I read about them on HGTV's website:

"These sisters are raucous and rowdy treasure hunters... they have a rebellious and independent spirit."
(Not sticks-in-the-mud. Not ho-hum. Not moody. And not me.)

"Their clientele includes music stars and Hollywood actors... they have a large and passionate media fan base." (They're admired by thousands. Known by big-namers. And I only met Bruce Willis in the 11th grade.)

"They find beauty and value in items that would otherwise end up in the trash." (Have keen insight into the "bigger picture" - probably take that perspective and apply it to people, too. And I can't seem to get past my cat-clawed leather sofa.)

So what's all the fuss? I don't know. It's just, well, in the last episode of Junk Gypsies, Amie and Jolie had this farmhouse relocated to a pretty little area out in the country, painted it pink, and decorated the insides. And it made me wish I was doing cool stuff like that, wearing funky clothes like them, leaning up against angel wings and a red barn door like this: 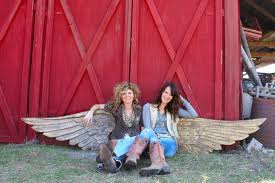 But a wise friend reminded me how difficult it is to do what God has for me - praising him with the voice he gave me - when I'm too busy envying another's tasks and abilities. So I may not be a Junk Gypsy, but I sure can teach a mean step class, bake amazing cinnamon rolls, and make a room really cozy with candles and throw pillows. I also have great taste in music and men and what's-funny, and I love helping old people find their cars. (But I'm not a very fast runner, though. Need to work on that.)

And truth is, do I really want a pink house? No. Did I think the fish they hung on the living room wall was weird? Yes. See? I just said no and yes to those things because they aren't the real Molly, for they don't reflect the voice God personally, thoughtfully, excitedly, and purposefully gave to me. (But the jacket? So very me.)
Posted by Molly at 8:12 PM