I hate it when empty water bottles fall out when I open the car door. It's so embarrassing.  "Again, a First World Problem."


What's a "First World Problem?" I guess it's a complaint or nagging issue that privileged people in wealthier countries have. Not sure if it's an old or new saying. But apparently it's part of my daughter's Facebook and Tumblr Meme adventures. (Memes are kind of like witty pictures or sayings that depict our modern culture's thoughts and views.) For example: 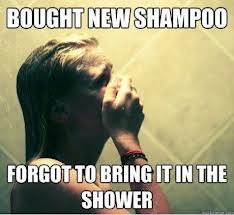 Talk show hosts are really good at discussing their First World Problems. Just this morning, Kelly Rippa gabbed on and on about how junk drawers and cluttered desktops make her nervous. Seeing a messy environment is like watching a horror film to her. (And just when I thought she might be a kindred spirit...)

I remember reading a book awhile ago called "Safely Home" by Randy Alcorn - super deep and made me think a lot. The main character's father was a street sweeper in China. The kind that would make Kelly Rippa proud, for he lived-out Martin Luther King's motto:

I could seriously go a billion places with that quote, but I remember thinking, "God, I'm a little embarrassed. Here I am. In America. Living in the 21st Century. Not sweeping the dusty streets of a poor Chinese village, but rather whining about sweeping my kitchen floor because of the big, sticky spot of Sierra Mist that attempted to dry, but only left a syrupy goop that I couldn't see because, well, Sierra Mist is clear, but then sure enough found it when I stepped in it - a week later - but was too tired to clean it, then forgot about it, but then remembered it again as the broom snagged a bit while going over it."

How's that for a First World Problem (and run-on sentence)?

But I also remember being sweetly covered by God in that moment. It was as if he was saying, "Thank you, Molly, for being aware of how blessed you are with where I decided to place you on this earth." And then I think he added a little, "Just stay reliant on ME, not on all the wealth you have."

And although new shampoo may make me super happy as I take a long, hot shower after working out in an air-conditioned gym (not one, not two, but three potential FWPs), my joy definitely shouldn't hinge on whether or not the shampoo made it to the shower.
Posted by Molly at 7:33 PM