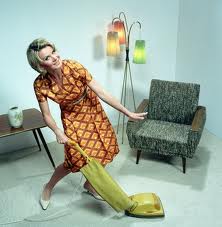 I've been known to cry on the phone. Not just "Help mom I moved to Alabama" type of crying. Nor the hormone-fueled and husband-directed "Why didn't you tell me you don't like my new boots?" type of crying. But rather, "Please explain to me again how the $2,500 out-of-pocket maximum isn't subject to my deductible because of the coinsurance minimum per calendar year?"

It's true. Health insurance billing departments have made me cry. And it's so embarrassing - them calming me down with a patronizing "I understand, Ma'am. It can be confusing." Once I even anticipated my tears and just hung up mid-sentence. "Hey guys! We've got a crier," I'm sure is what the representative proudly said.

It's like Algebra 2 all over again. They can explain stuff over and over and still lose me each and every time. So out of desperation I've said things like, "Excuse me, Sir...Ma'am...Mister. Could you please start over? But this time, pretend I'm in kindergarten. Starting with the definitions of deductible and subject to. Please. Thank you." And then I'd bite my lip to stifle a sob and mumble real fast under my breath, "Thanks-'preciate-it."

Is this all too much to admit? Me not being adult enough to stand-up to the condescending health care billing representatives of the world? I'm thinking it might be. Somebody stop me.

But then one day shortly after my latest phone crying incident, something beautiful transpired. I called the 1-800 number on my vacuum cleaner to....well, for lack of a better word, complain. Probably the first time in my life I did something like this. Because only weird, pale, daytime television viewers call the customer service phone numbers on the back of their appliances, right?

So there I was on the phone. Maybe not with a billing department, but with a representative of some sort nonetheless. And I was complaining about my cheap vacuum, hoping to get hooked up with some kind of rebate or whatever. And nothing short of a miracle happened, for the sweetest, most soulful and understanding vacuum representative replied to me,

Ah, vacuum lady to the rescue! I could have kissed her. It was one those moments I thought, "Where is a phone survey after-the-call-is-finished when you need one? Give this woman a raise!"

And on that day, I got all jovial and carefree, embracing my husband's mixed-up phrase, "Praise-elujah, Halle-Lord!" And I quickly thanked God for people like her. I really did. She was refreshing. She laughed. She called me honey. And I didn't need a dictionary when she talked. After all, I certainly know craaappy. 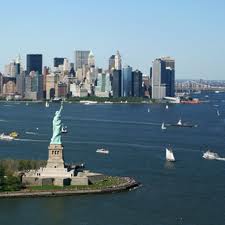 Some people are spending the week in New York City. Eating at swanky restaurants. Bumping into the likes of Colin Farrel and Jason Alexander. No biggie. (Just B-actors, right?)

And some people are also texting pictures of Times Square to their loved ones. And probably checking out the cool heart-shaped ice sculpture over there, made special for Valentine's Day. Taking in all that energy. Waking up each day in a city that never sleeps.

Yawn if you ask me. Because I'm over here doing my thing: "Look at me adding blueberries to these cheerios. Whose turn is it to jiggle the toilet handle? I need to buy more spoons."

Interestingly enough, the "some people" I'm referring to is my husband. And to think I could have gone! Shoulda-woulda-coulda. A business trip for him, a day of adventure and hijinks for me and my cute scarf. Don't worry, I wouldn't have been alone. I know people. I've got a cousin Pat in NY and a friend in Jersey. And of course, there's Kathie Lee and Hoda.

Strange thing is, my husband had dinners at 9:00 pm with clients and coworkers. Probably didn't eat until 10:00. That's Colin Farrel time, folks. So I'm kind of hoping he saves some of that flava for Orange County. Because the next time he wants to get to The Outback by 4:45 to avoid the rush, I'm going to call him on it, "Hey Mr. New York man, not so fast. Save those white denim party pants for at least 6:00 pm, will ya?"

So while I sit here waiting for my ship to come in, I'm suddenly reminded: My ship is in! It's at the dock! Maybe not in the New York Harbor, but this non-business-trip season of life is fabulous! It's long been diaper-free, and I'm now teenage-braced.

Sure it's a mixed-bag existence, working a little away from home and a lot in the home, not knowing exactly where I'm headed career-wise, mom-wise, home-wise, and one day empty-nest-wise. But it suits me! Besides, I'm entering my confident years - a time I can proudly say without muffling, "I use condensed soups!"

And I heard a perfect prayer at church this past weekend - a prayer that helped anchor my ship:

...and so on and so forth. With a God who's created a special role for me - for you - I'm ready (and somewhat excited) for my pink robe days, my teaching days, my children's school-to-basketball-to-Target-to-dentist-to-voice-lesson days, my aspiring writer days, and even my I-hate-this-day days.

So start spreading the news!

And God Made a Farmer 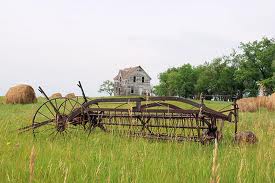 There are a couple things I learned about myself on Super Bowl Sunday. For one, I tend to laugh at commercials that a respectable person - mother, daughter, granddaughter, blogger extraordinaire - shouldn't find very funny.

And the second thing I learned about myself is that I have a really cool dad. Something I always knew, of course. But after watching the Super Bowl's "And God Made a Farmer" commercial - right alongside my father - a switch went on in my head.

As in, "Molly, your father's childhood in upstate New York didn't entirely consist of avoiding creepy cellar doors and dropping cats from barn windows. He was a blood-sweat-and-tears farmer. A man's man."

This fresh insight came the moment Paul Harvey's voice said, "God looked down on his planned paradise, and said, 'I need a caretaker,' So God made a farmer." (It's right here if you missed it: And God Made a Farmer.)

So what did farmers do in the 1950s-60s anyway? Well my dad and his father grew wheat, corn, and oats. They also grew black beans called "Turtle Soups" and shipped them off to a country in South America. Apparently the beans are loved down there and not much up here.

And holy cow, for there were six! And they'd milk each one with their hands. No fancy machinery. And if they did have machinery of any kind, tractors and what not, they'd fix it themselves. Mechanics from John Deere didn't make house calls.

And what did they do with milk from six cows? It got hauled into the kitchen where they poured it into a cream separator. And the people who actually did make house calls were the Land-o-Lake guys. They came out once a week to buy and pick up the cream for butter-making back at their factory. (Forget the money, I'd be all, "It's human interaction DAY! Someone is coming to my farm! Special occasions call for pearls and stockings.")

Now what about the strength needed to move hay bales around in hay lofts that were over 100 degrees? A lot of back-breaking and finger-blistering work, yet the sense of accomplishment from a job well done would make it all worthwhile - or at least make lemonade taste like heaven. And to think each bale of hay weighed more than my dad. Hard work, that's what.

So now scale waaaay back in the blood-sweat-and-tears department and fast forward to present-day life in my kitchen, where the sense of accomplishment doesn't come from separating cream from milk that I "hand got" from cows in my backyard. Rather, my proud moment came the day I made something extraordinary...

Proverbs 12:14 says that the work of your hands will reward you. What is that reward exactly? The possibilities are endless! And even though my dad hung up his rugged cow-poop-stomping workboots many years ago, God gave him an amazing work ethic and desire to provide and care for his family. Besides, he just knows things now that are cool to know.

As for me, although my boss shrimp linguine making skills may not compare to a day in the life of a farmer, it did bring a sense of accomplishment because it was a job well done. God must have looked down on my family and said, "They need a break from turkey burgers." So God made a really really good recipe that was easy to follow and didn't ask me to grind my own nutmeg...or milk a cow.