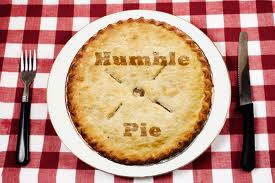 Sometimes I think I'm something else. A true miracle. A gift to the world. But such self-assurance is usually followed by a professional blow dry. I feel like a model every time. I turn heads. I become magical.

But then something happens to break the spell. I take a shower and turn back into a pumpkin...despite every effort to replicate my once sleek and chic look. Where did that fabulous woman go? She looked like a million bucks!

And not too long ago, I noticed this guy at Target staring at me. It must have been one of my magical hair days, because I assumed he thought I was something else. And as he began to walk toward me, I thought, "Play it cool, Molly. When he says something nice, just say 'thank you' and move on."

Only he didn't say something nice. Or mean. Or even creepy. He just said, "You look really familiar." But I wasn't prepared for that. What to say? Well, since I had already rehearsed "thank you" in my mind, that's what I went with - only it was a shy, squeaky "thanks" while doing a cute little double shoulder shrug.

What am I...hot stuff? And not only that, but every so often I feel smart-ish. Or more insightful than smart. Intuitive maybe. But then something happens - again - to put me in my place.

I was setting up for my Tuesday's strength class a few weeks back, when a class member came to me and said, "You know, Molly, you said something the other day that really stuck." My eyes opened real big,  "I did? I said something that stuck?"

And I wondered, what amazing things did I say to this woman? Life changing words of wisdom? My thoughts on world peace? My deep insight on Downton Abbey? (The season had just ended.)

Then she continued, "You once said that you can't tighten the laces of one shoe without tightening the other. And ever since you said that, I do it every time!"

Ohhh. But of course. Shoe laces. The world hinges on shoe laces.

I know I'm not alone in this. We all get a little humbled from time to time, right? It even happens to celebrities, unbeknownst to them, who find themselves eating at the same restaurant as my husband.

So I get a text, "Hey, guess who's eating at the table next to me. Colin Farrell. And he's with a bunch of his friends." Turns out one of his friends was Bono. Only my husband didn't realize it at the time. But later on, when a friend took a closer look at a pic they took, there he was on the left: 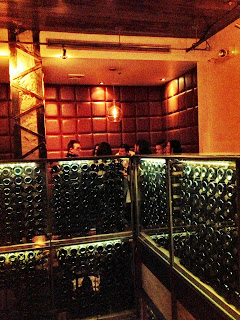 Perhaps it's hard to tell. But I asked him, "Honey, how could you NOT know it was Bono?" And he said, "I just thought it was some old guy wearing red-tinted glasses, trying to be cool because he's hanging out with Colin Farrell."

I'm still not sure who was brought down a notch - Bono or my husband for not knowing about these things.

Ah, the lessons we learn. James 4:6 says, "God opposes the proud, but gives grace to the humble." And since grace is my most favorite thing in all the land, I'll trade flipping my hair for the world's amazement for God's grace any time, any day.

As for my dizzying intellect, I heard it said (this is a good one) that people don't care how much you know until they know how much you care. So if that means helping people achieve the wonderful feeling of equally-tightened tennies, then I'm off to a good start.