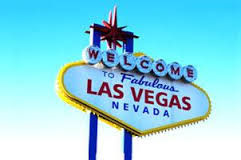 Just found out we're squeezing in an extra vacation this summer. Goin' to Vegas, baby. It's a little tag-a-long business trip with the hubs.

And with the kids.

Which is fine. I think. Fine with Jeff and I, anyway. We don't do (nor know how to do) very Vegas-y things. But I've got a couple fancy friends who do. And their FB pics are always of them standing on rooftops of tall buildings, one hand on hip, chin-tilted down - with the flashy lights of the strip in the background - wearing something shimmery that you know didn't come from Kohls. (Adding to the bucket list: "Attend a rooftop party.")

So since this will be a family excursion, all will be fine and kid-friendly. Or will it? I'm not so sure, because after listening to this guy yesterday explain what it's like to actually live in Vegas - with his family - I'm having second thoughts now.

At first he said it's just like any normal town or city. There are regular people all over the place. Even people who love Jesus. There are parks and nice schools. Even churches.

But there are also billboards. You know the kind.

And on just an ordinary day out with the fam, their minivan stopped at a red light. And there it was. A billboard for their seven-year-old son to stare at while waiting for the light to turn green. A billboard with six half-naked girls posed "just so" on the larger-than-life photo.

So the boy turns to his ten-year-old sister and very innocently says, "Which naked girl is your favorite?" Like he's asking which Star Wars character does she want to be. Or which M&M color is she going to eat first.

And in perfect mom-timing, the guy's wife turns around and says, "You're NOT supposed to have a favorite naked girl!"

And although I don't know what all else was said, I do know three things:

Oh, I already knew my family wasn't the only family whose kids say the darndest things. And that I'm not the only mom whose first response is a "not supposed to" instead of an empathy-filled, "There there, now. I understand your wanting to have favorites in life, but..." and yackity smackity.

But good for this boy's mom for piping in. Whether her approach was lacking in grace or was super right-on (it was right-on) - we moms need grace all the more when our parenting takes a detour OR seems at odds with the one whose child isn't the same age as our child...or has same fears, temperaments, tendencies, and struggles.

Then again the Bible does say to teach our kids God's ways for living. And they're good ways for living, too, for his love for us motivated each one. And Deuteronomy 11:19 says to teach our children his ways when going to bed and when getting up, when hanging out at home and when out on the road (checking out billboards, apparently).

With that being said, I sure hope I'm never one to add or take away from the Bible. But if I were to do such things, I'd add an 11th commandment: "Thou shalt not have favorite naked ladies."