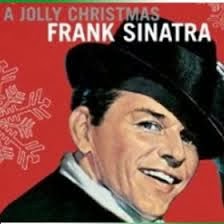 I can always count on a certain radio station to play the same Christmas songs over and over, year after year. It's not as nauseating as it sounds; Mariah Carey's "All I Want for Christmas is You" has become more of a seasonal expectation now.

When I sing along, I'm pretty sure I sound like her. It's even hard to tell whose voice is whose on certain parts - especially the beginning: "I-i-uhh-uhh-aye...don't wanna lot foh-orrr Christmasss..."

But nothing beats Frank Sinatra's "Frosted Window Panes," correctly called "The Christmas Waltz." Either name does it for me, for they both invoke feelings of wintry coziness and glee. And I'm no musician (just an amazing Mariah Carey-esque vocalist), but the pace and phrasing of that one part - "and this song of mine in three quarter time" - is genius.

Actually, the only song that could possibly top "The Christmas Waltz" - or even come close - is "O Holy Night." It's ALL in there. Everything you need to know about frosted window panes, candles gleaming inside, and painted candy canes on the tree is basically found in "O Holy Night."

Check out some of these old school lyrics, broken down "Molly school" style:

O Holy night,
(A supernatural, set-apart time in all of history.)

The stars are brightly shining.
(Probably not a lot of clouds out.)

Long lay the world in sin and error pining,
(People have been trying sooo very hard for sooo very long to meet God's standards - regretting this...feeling shame over that...)

'til he appeared and the soul felt its worth.
(Not sure, but I think this means that once Jesus came and word got out, people were amazed at the love he had for them. And they probably said things like, "He really DOES think we're worthy of saving and redeeming after all! He might even kind of like us. Who knew?")

The thrill of hope, the weary world rejoices,
For yonder breaks, a new and glorious morn.
(At last! The exciting part! The "frosted window pane" part! The oh-so-tired-from-trying-so-hard-for-so-long WORLD finally celebrates by lighting cranberry-scented Yankee Candles and hanging candy canes that they may or may not have gotten on clearance at Target last year, before they got a REDcard and were afraid of identity theft because of the recent, nationwide computer hacking. Or perhaps, being that it was over 2,000 years ago, they probably celebrated in a different way, but was just as cool.)

And that's not all! The song continues on, speaking of how his "law" is now love and his gospel is peace. The whole song - both music and lyrics - is gloriously epic.

And that, my friends, is why we celebrate this time of year. A time when HOPE finally waltzed (Christmas-waltzed!) into the world, changing everything.