For the Love of Sugar Cereal 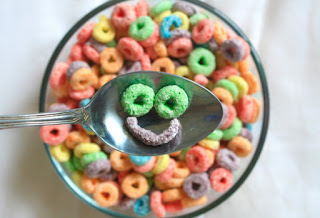 We ate a lot of cereal when I was little. A lot of sugar cereal. "Don't forget to buy sugar cereal at the store today!" would often echo off our crayon-covered walls. And if drab, non-sugar cereal was all we had, there was a sugar bowl (sometimes mug) sitting next to the plate of cat-licked butter on the kitchen counter, and I'd just stick my spoon right in.

The only problem was I did this after tasting my cereal - as did my four siblings and my mother with her coffee - so you can imagine the sugar globules that had formed with repeated dips of wet spoons. So I determined it was best to stick to pre-sweetened only.

Now, there was one particular cereal that captivated me mind, body, and soul the summer between second and third grades. I forget the name, but it came in a blue box and resembled mini powdered donuts. The entire neighborhood of south-east Omaha (where we temporarily lived) was nuts about it. Do-nuts about it.

But one day, we ran out. Sad news for two reasons: 1) The return of sugar globules. 2) It lead to my first and last street fight.

For starters, our neighborhood had street fight written all over it. Even the name of our street was written, no, spray-painted on the side of our house. Things got stolen from our yard. Kids walked around with names like Cat Daddy and Bubba. Part of the ceiling fell down on my parents while sleeping one night! Scary stuff to a lispy and freckly girl named Molly. But not as scary as running out of donut cereal.

It was Bubba's sister, or was it Cat Daddy's? Doesn't matter. Just think mean girl, a mean sugar-cereal-pusher who lured me to her house with the promise of donut cereal. How'd she know we ran out? Apparently I was an open book when it came to my love for this cereal, but a smart open book, for I said, "You just wanna get me away from my house so you can beat me up."

And she said, "I can't beat you up because my momma is sitting on the porch."

Dang it. She was right. I saw her momma myself while riding my bike around earlier. And when her momma sits, she sits all day. Perhaps mean girl has turned nice girl and now wants to be friends?

Huge mistake. When I got over there, the porch was completely momma-less. And as mean girl and her helpers (she had helpers!) gathered around to push, kick, and shove me down the street... in the direction of home (the only positive)... I remember going limp as I rolled along like a loose powdered donut.

Keep in mind, these were seven and eight-year-old girls. Not much damage done. And I must have bounced back pretty quickly because I remember playing in fire hydrants with the same girls the very next day, fire hydrants that Cat Daddy or Bubba illegally wrenched open.

So, for the ponderers out there, why those girls be all up in my grill yo? If it was a God thing, a "suffering produces endurance and character and hope" thing, then...oops! Because I don't remember having a single God thought as I rolled on home. But I wonder if God, as he watched the entire botched donut deal play out, leaned over to the closest angel and said, "This is practice for when she thinks a porcupine is after her in the woods of Maine, the moment she begins turning to me for rescue and comfort." (Maine - the next stop in my 'cross-country-and-back-again childhood.)

Now, what else made running out of donut cereal a sad day? Oh yes, sugar globules - hard, crusty, germy chunks of sugar (with a random coffee granule thrown in). But just like God teaches us to trust him during the many street fights of life, he can certainly do lovely things with the many sugar globules of life. After all, with patience, they do dissolve over time, adding sweetness to our days when someone forgot the sugar cereal.