Women Were Created For Awesomeness

Thank you, clothing industry, for making "boyfriend jeans." What a good call, for they turn the oftentimes distressing jeans-wearing, "can't get 'em up past my knees" experience into something comfy, relaxed, and less terrifying. Like a good boyfriend!

But if I actually wore my boyfriend's - my husband's - jeans, why, you wouldn't be able to find me for days! One of him equals two of me. Which could be good: I'm in the jeans; let me be!

Yet my fondness toward all-things boyfriend dwindled the day I saw a rack of "ex-boyfriend" t-shirts. What's next, boy of the week t-shirts? Flava' of the month? Such sassy-ness. Such bitterness. And they didn't look one bit different from current boyfriend ts. Does someone at the t-shirt naming company have a yucky BF memory? I mean, who doesn't - but to name a shirt after it? I'm confused.

Oh I know, I'm making something out of nothing here. Maybe exboyfriending a t-shirt is a positive thing. But the whole idea just seems to chip away - if only a little - at the loveliness of womanhood. I like a lovely woman. I want to be a lovely woman. A woman who is vibrant and courageous, nurturing and relational, smart and confident, adventurous and bold, spunky and zesty.

To be a woman is to be regal. We are the crown of creation. Before we existed, something wasn't right. Something was missing. What was it? Women. GIRLS. It is not good for man to be alone. (Genesis 2:18) Creation was already good, but not all the way good. God had a plan to make it gooder! And in enters the ladies.

Author Stasi Eldredge wrote this about women: "She is not an afterthought...She is God's final touch, his pièce de résistance. She fills a place in this world no one else can fill. Step to a window, ladies, if you can. Better still, find someplace with a view. Look out across the earth and say to yourselves. 'The whole vast world is incomplete without me. Creation reached its zenith in me.'"

(Would it be obnoxious to shout out "GIRL POWER" right about now?)

So after being reminded of where I fit into the order of creation, it just doesn't feel right to take the (oftentimes easier) sassy and bitter route all the time. (Okay, maybe some of the time.) Besides, what woman doesn't aspire to be a more comfy, relaxed, and less terrifying she? Kind of like, well, a good girlfriend!

Give Your City a Hug, Even if It's LA 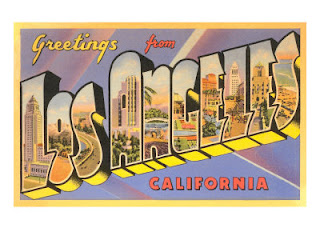 I was half-listening to the radio when the DJ got my attention by saying, "God loves LA!" And then he said it again. And then again. But on the third time he added, "No, really! God loves LA." Like it's so hard to believe. As if Los Angeles is on the fritz with God and is the last love-deserving spot on earth.

Is it because of The People Vs. OJ? Or is it Venice Beach? Beverly Hills? Compton? Traffic on the 5? Disneyland on a Saturday? Or is it the entertainment industry with all its phonies, druggies, boobies and zombies? Or is it the political climate? Because we all know it's not the seasonal climate, especially with that summer-esque February we just had.

Do radio DJs in Franklin, Tennessee or Boise, Idaho feel the need to convince people that God loves them? Those cities seem kinder and more respectable than Los Angeles, right? More family friendly. I could be wrong. Maybe we should google it. (Just don't google Pioneer Woman's "Knock You Naked Brownies." I mean, do google it - they're amazing! Just be careful.)

But despite its bad rap (yes, we Californians do celebrate Thanksgiving, thank you very much; a question someone from a "better-behaved" state once asked me; true story), I'm quite certain God still loves LA. He might even have Randy Newman's "I Love LA" on his playlist. But even in the face of John 3:16 and its "For God so loved the WORLD" declaration, there are those who still find it a little hard to believe. Those who think God may have taken things too far in the love department.

So in times like this, I pull out the ol' "what God won't say in heaven" test. I do this with the more meaty, audacious things of God - his forgiveness, his grace, his all-knowingness, and in this case, his love. And I imagine myself asking him one day, "God, could it be that, this whole time, I thought you loved me too much? Was I reminded of your love too often? Even when I was very bad and tired and mad at you, I noticed you still loving me...in the most unsuspecting and unique ways. Was it all in my head?"

And even though I don't know exactly what he'll say to me (my brain - my heart - would probably explode if I did), I do know what he won't say: "Molly, you thought I loved you more than I did. You simply had too many God-loves-me thoughts. End of story."

See? It'd never happen. He'd never say that. And in a weird way of connecting things, God would never say about cities, "I really only ever loved Walnut Grove and Mayberry."

So take heart if you live in an often-judged land, and your local radio station's DJ got you falling in love again with your city (a little Usher never hurts). And know that it is God who has the last say when it comes to the world he's been patient with and does not condemn, but rather changes. The world he has loved...this whole time.