Part One - CASUAL REFLECTIONS ON GROWING UP CHURCHED: "Bathrooms To the Left, Decision Room To the Right" 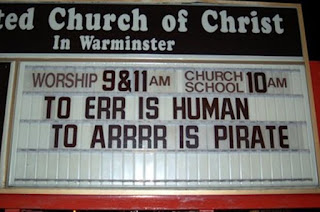 Growing up "churched" can be a strange thing. On one hand, there's a whole lot of corny attached to it. A wide array of corny. It happens when humans attempt to make sense of their church's doctrines, policies, and traditions, and it often comes across as formulaic, robotic and sometimes, well, silly. Leaving the awe and wonder and unpredictability of God to lose some of its flavor.

On the other hand, being churched is the best thing that's ever happened to me, for I've seen God love me through his people, not their methods and techniques - however oft they were. Even if they had self-serving motives, God loved me through them, without them even knowing! He does that, you know. He can shine and sparkle through anyone and anything he wants, however flawed.

And I think we can all agree: not everybody sitting in a church is interested in following Jesus. But God used my choppy and very church hoppy experiences to not only show his love for me through his people, but also expose me to: 1) Cute boys, which led me down the aisle with cutest one. 2) Churchiness, which both perplexed and entertained me. 3) Scripture, which hasn't ceased to reveal God's precious thoughts toward me. Thoughts that outnumber the sands of the sea. Thoughts that have wooed me to him all these years.

Yes, I've seen God's hand over and over and over again in church. (See? I just used the phrase "God's hand" - how churched am I?) And I've seen this great big hand of his at churches I've grown up in...in America, of all places, where churches lately accuse each other of being too legalistic, too liberal, too western thinking, too judgy, too watered down, too in-depth, or too loud. There is no end to the many "toos" behind churches getting a bad rap. Ah-ha, maybe that's it! Could it possibly be the bad rap? I have a new favorite "too" now. (Christian rap is on my list of things-that-should-go-away.)

So without going into a super serious, theological, seminary-student discussion over why our American churched culture is getting eyes rolled at them - partly because I hope to write stories about how God met me and others in the midst of human-filled churches and partly because I'm just not that well-rounded of a thinker - I'm going to stick to the idea that started off this introduction, the idea that God uses a whole lot of corny sometimes.

Attending Christian churches most of my life (or should I say "communities" instead of churches to stay relevant?), I've always had a hunch that something was up, that something hysterical was going on. But until about eight years ago (I am now 43), when our family of five moved from Orange County, California to Birmingham, Alabama, I had difficulty gathering together my church-is-corny thoughts. However, there's nothing like a move to the Bible belt - to the very buckle of the Bible belt - to help a gal sort through her churchy observations.

I was simply mesmerized by the way some of the people "did church" over there. Not in a better-or-worse sort of way, just different. Although the area was more denomination and "church membership" focused than what I was used to - like the transferring of church memberships from one church to another, certificates of transfer, inactive vs. active memberships, and so on (all funny stuff) - I found the people of Alabama lovely, and I got involved regardless.

One night I volunteered as a greeter for a Christmas outreach at a local church. People from miles around showed up to collect toys for their children. My job was to mingle with families as they waited for instruction in the main sanctuary (aka: worship center, gathering room, big people church). There was a guy singing Christmas songs to the strum of his guitar on stage. There was a refreshment table. It was very pleasant.

Then the coordinator gal got behind the mic to welcome everybody and make a few announcements. She said, "Now, this is how tonight is going to work: when you see your number on the screen, your children will be escorted to the craft room while you head through these doors to meet up with one of our volunteers." Everything seemed normal and non-corny.

Then, out it came: "And help yourselves to brownies and sweet tea, and please read one of the Billy Graham tracks in the center of the tables. Oh, and down the hallway are the bathrooms to the left, decision room to the right."

"...bathrooms to the left, decision room to the right." The quote of the night.

I knew right then and there I had myself a title for a book one day (or blogpost). But please keep in mind: the "decision room" to which I'm referring has nothing to do with transgender this or that, rather it's where folks might go in certain church buildings to say the "sinner's prayer" (yet another churchy saying).

At any rate, it was church corniness at its best, and it was perfect...affectionately speaking, of course. After all, Billy Graham tracks are awesome, bathrooms are necessary, and decisions for Christ must be made. Sure the outreach coordinator didn't say what kind of decision must be made in the "decision room." But I guess if you read a Billy Graham track, it was assumed. However, I did wonder if anyone struggled with which sense of urgency to give priority. I mean, when you gotta go you gotta go. Or what if the bathroom served as both bathroom and decision room? Can a person pray to the sound of flushing toilets, while the cross-shaped silk flower arrangement on the wall tickles the back of her arm? Absolutely.

Looking back, imagining if I were in charge that night, I would have shared something heartfelt about my days knowing Jesus, with a sincere "and you can know him, too" finish. But that wasn't how God wanted things to play out that night. He took the cheesy route. For all we know, it was the love of the volunteer who helped put toys in trunks that caused someone to think twice about the promises of God they read about in that-them-there Billy Graham track. Thus prompting a non-decision-room decision for Christ at a later date, which could very well fall on a Tuesday morning in the sock section at Target. You know what they say, stranger things.

So as you eagerly await subsequent blogs on the topic of growing up churched, and in light of the fact that corny is in the eye of the beholder, please extend grace to me, taking off the white glove you planned on using to test the dust of the thought processes behind each story, and put on something that makes you your chillest you. Because there's a lot of corny ahead...