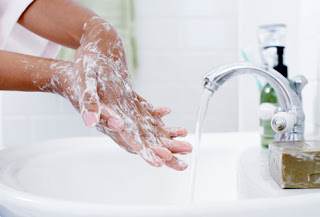 According to WebMD, Americans are "catching on" to hand washing. Their website provides detailed written instructions and gripping video tutorials for those on the fence about the pros and...pros. But if you're like me, somewhere between the suggestions "turn on faucet" and "rub hands together for 20 seconds," your brain will wander to the unopened bag of black pepper and sea salt potato chips in the kitchen.

Truth is, I don't like being told how to do things. (But I like telling people how to do things, but that's a confession for another day.) Petty rules bring out my sass; Oh no, I rubbed my hands together for a non-recommended 12.4 seconds. And there was no soap. Or water. And it was a port-a-potty. At a circus. In a mall parking lot. Will I be okay?

And what would happen if, for example, I went swimming right after eating, with food still in my mouth? Or I didn't alternately add milk to the batter? And what if I never use a top sheet? Or accidentally put Magic Shell in the fridge? Will it explode? Will I explode? (*Tip* Magic Shell will unharden itself.)

I understand. Boundaries and guidelines are important. But some rules are unnecessary or too obvious. You can find them in sports, schools, churches - probably in my home, too. You name the place, I'll show you the eye-rolling rule.

But what about the biggies? The more serious rules? Like, how a person shouldn't lie or be a prostitute - or both?

Take a look at Rahab. What does God want us to learn from this prostitute who lied to protect the spies of Israel? That lying is super naughty? That being a harlot is a huge no-no? That sexy is of the Devil? Or would God rather have us focus on Rahab's desire to honor him and his people despite her very human and imperfect way of doing so?

What's more amazing is God chose to list Rahab in the genealogy of Jesus, along with other notorious people of the Old Testament who broke a ton of rules, in really horrible and shocking ways. Without condoning sin, why would God purposely include law-breakers in his royal lineage? I think it's because he focused on their faith, their attempt at faith, their wanting so desperately to have faith, and on his unparalleled ability to redeem anyone, anywhere, anyhow he wants.

If God focused on my shortcomings, I'm certain my latest one - stealing Stevia packets at Starbucks to replenish my stash at home - would be the last straw. But instead, his love and kindness compels him to focus on my daughterness, for my faith in what he personally did for me on the cross has made me his girl. A glorious truth that makes me think twice about hoarding more Starbucks goods.

So if you get rule-weary like me, and you're questioning things like, "Is God's endgame really about getting us to abide by a list of dos-and-don'ts?" Be encouraged, for the God of the universe is much more interested in adopting us as sons and daughters, washing us clean from our past, present, and future rule-breakings. And it's a sparkly kind of clean, too, one that has power to change us, lasting longer and reaching deeper than any 20-second hand wash routine could ever do.
Posted by Molly at 7:46 PM No comments: